To address this need, the team at St Vincent’s Hospital continue to find ways to stay ahead of the game. Their latest initiative saw St Vincent’s become the first public hospital in Australia to be given the opportunity to trial the revolutionary new technology, the Exoscope. In an Australian first, the neurosurgery team used this new technology to help patients with brain tumours.

The team – led by Acting Head of Neurosurgery, Paul Smith, and Nurse Unit Manager, Kathryn Connor – work hard to care for patients with some of the most challenging medical diagnoses of their lives.

The Exoscope is a microscope that’s a cross between a super high-definition digital microscope, a robotic arm, and a brain navigation system.

Having seen the impressive results from the trial, our surgeons have expressed the need to purchase this equipment, which costs $750,000.

With your help, we can purchase this ground-breaking equipment that will change lives.

“Having an Exoscope would place St Vincent’s at the cutting-edge of new technologies to help patients with complex neurosurgical problems. We would have a far better view of the brain. And the flexibility of the robot arm means, as surgeons, we don’t have to place ourselves into awkward positions that make performing surgeries much more difficult.” 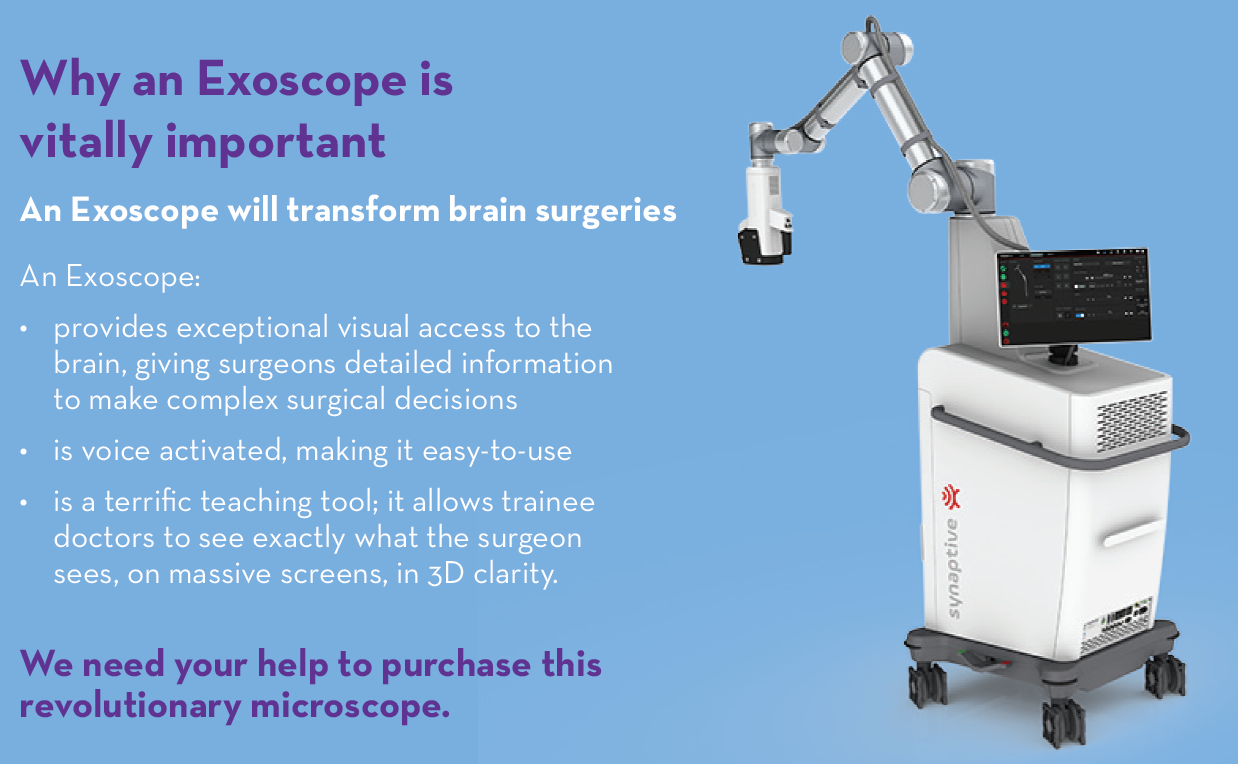 The Exoscope will transform the lives of patients and clinicians. If you consider that brain disease affects one in six people, it is likely that someone in your life will be impacted. What price can you put on helping to save a loved one’s life?

Don’t forget to donate before 30 June to help St Vincent’s make a difference in the lives of everyday people. All donations over $2 are tax deductible.

The Exoscope will save and improve the lives of patients, like 29-year-old Ben Hickey.

Ben Hickey was living a charmed life. He had accepted an incredible opportunity through his company, P&G, to work in South Africa. During a two-and half-year stint, Ben immersed himself in his new environment, enjoying numerous trips to exotic locations, making many new friends, and even finding love.

As Ben was nearing the end of his contract in South Africa, frantically tying up loose ends and attending final meetings, he started to feel what he describes as a ‘brain fog’.

“It was a really big week with final meetings and goodbyes but I was struggling to read and stay alert. By Friday, I was getting worried, so a few of my friends and girlfriend, Chloe, took me to hospital. It turns out I had a brain tumour that had apparently been growing in my head for the past three years!”

He was rushed into surgery to remove the tumour. Luckily, Ben’s mum and best friend were able to travel from Wodonga in Victoria and London respectively to be by his side.

Ben’s mother, Ann, recalls when she first received the news. “I woke up on Sunday to a lot of messages from Ben’s work colleague, Cassie, saying, ‘Benjamin’s in hospital can you please call me!’ We were told he had a bleed on his brain. My mother’s husband died from a brain tumour three years ago. When I was told he had bleed, all day I kept thinking please don’t let it be a brain tumour.”

Following the surgery, Ben underwent four months of chemotherapy and radiation before returning to his parents’ home to continue his recovery. It was at this point that Ben’s health and energy started to decline very quickly.

“I started to feel really average to the point where I couldn’t even speak. I remember crying from the intense pain of a headache. It was the most scared I’ve felt throughout the whole experience. I wasn’t ready for this to happen because I felt like I was managing and progressing, and I knew just how hard it was for my mum to witness.”

It turns out that the tumour had started to grow again and had begun to push on his skull, causing severe pain and pressure.

Ben was rushed to St Vincent’s Hospital Melbourne a renowned leader in neurosurgery. The team performed a second operation to remove more of his tumour and to release the pressure on his brain. He had some clotting issues, so it wasn’t a straight-forward operation.

Although Ben has a long road of recovery ahead, including occupational and speech therapy, he is in excellent spirits. He says he is feeling the best he has felt since he first learned he had a brain tumour, just seven months ago. He credits the incredible doctors and nurses at St Vincent’s, as well as special visits from pet therapy dog, Macca, with helping with his recovery.

“I want to thank the incredible team at St Vincent’s. I’m grateful every day because they’ve given me hope and confidence that everything will work out,” Ben said.

When asked if this experience has changed his perspective on life, Ben reflects that although his outlook, which has always been extremely positive, hasn’t changed, it has made him appreciate his ‘people’ even more.

“My family have been amazing, and my girlfriend and friends have all been incredibly supportive. I received a message the other day from the footy team I played with when I lived in Sydney, letting me know they had all shaved their heads in my honour. I was so moved by what they did.

“My life is so rich because of the wonderful people I’m surrounded with. That’s what life is really all about,” Ben said. 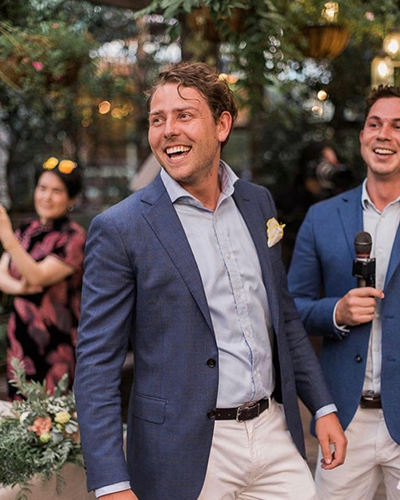 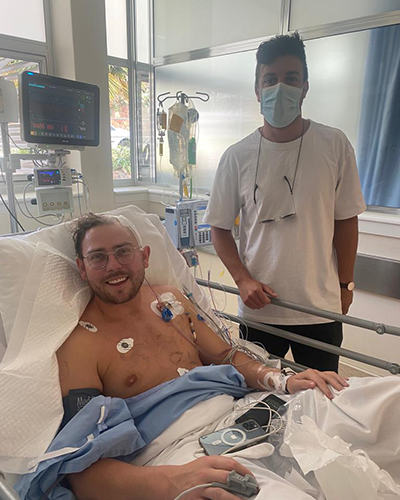 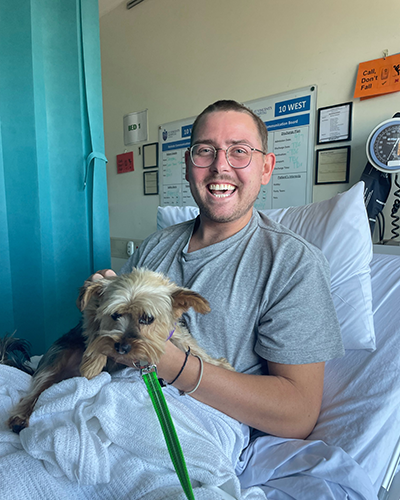 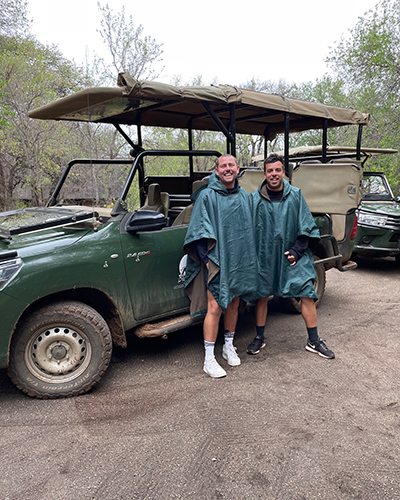 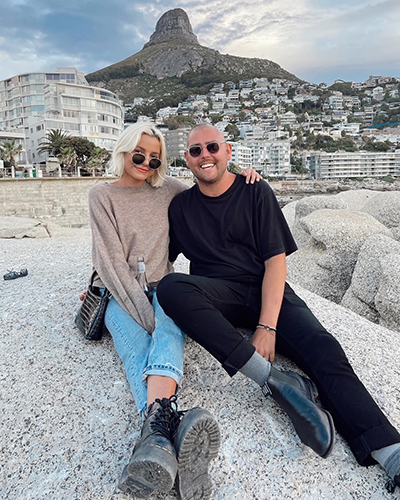 We need your help to purchase this revolutionary microscope.

Please support our patients and dedicated staff at tax time by giving generously. Your gift will help us to provide innovative, life-saving brain treatments for the Victorian community.