The Ultrasound machine has evolved to become an essential tool for every hospital. The latest Ultrasound machines take images of patients’ internal organs in a way that is both safe and accurate; these images are used in complicated, life-saving procedures that are performed everyday by St Vincent’s radiologists, anaesthetists, neuro and cardiac surgeons.

St Vincent’s Private Hospital’s Vascular Cath lab urgently needs your help to replace their ageing Ultrasound machine and purchase a brand-new machine to ensure patients are supported now and into the future. 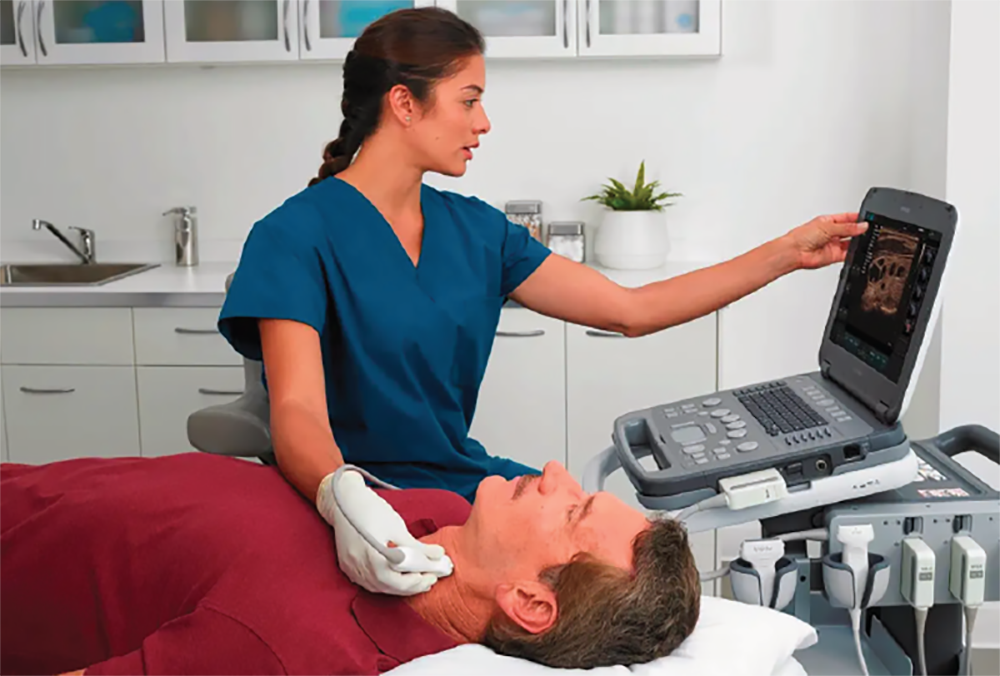 St Vincent's Private Hospital Radiologist, Dr John Vrazas says the Ultrasound is an essential piece of equipment in the Cath Lab. “One of the key uses of the Ultrasound is to achieve accurate placement of a needle into a patient. To avoid inadvertently hitting an artery or a nerve, I need to be precise, first time, every time. With an Ultrasound, complications are greatly reduced.”

The Ultrasound can be used for a wide variety of common but serious conditions, including cancer, heart disease, and vascular conditions. You may have one of these conditions, or you may know someone who does. With your help, we can save thousands of people’s lives and improve the care patients receive at St Vincent’s. 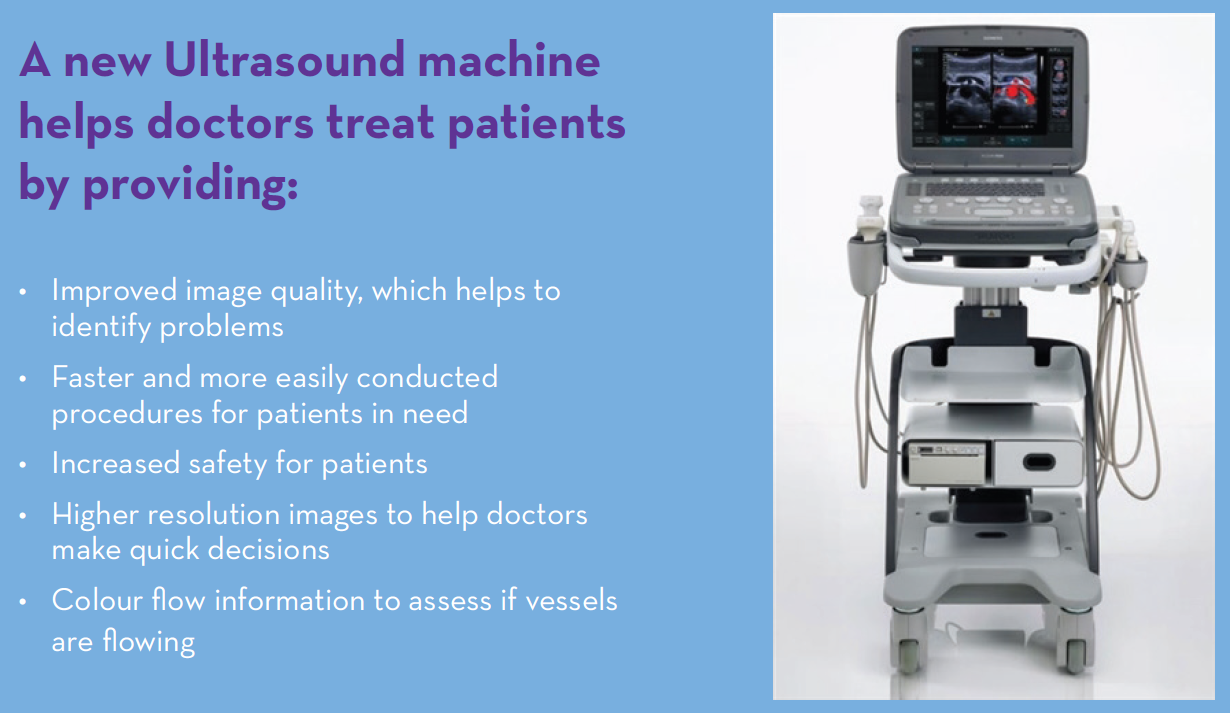 The Ultrasound machine reduces the risk of complications that lead to additional surgeries, recovery times, and even death.

Procedures that are performed using the Ultrasound machine are often lifesaving. Dr Vrazas explains, “Anaesthetists use it to put lines into arteries and insert central lines. These are often situations when a patient is in dire need of immediate, accurate treatment.

“It’s also used for draining and fluid collections. Imagine putting a large bore needle into someone’s chest, you want to ensure you’re getting the needle directly into the fluid and not into an organ, for example someone’s heart.”

The cost of the new Ultrasound is $70,000. Please support our patients and dedicated staff at tax time by giving generously. Your gift will help us to replace the current Ultrasound machine, which provides vital care for so many of our patients.

12 October 2021 is a date that will remain etched in the memory of Strathmerton resident, William Owen. It was the day his life changed forever with the shock diagnosis of terminal lymphoma cancer.

Six weeks before to this ominous date, William had experienced a number of COVID-like symptoms: lethargy, high temperature, sweating and an increased heart rate. He took a COVID-19 test and when it came back negative, like many of us would, he took some cold and flu tablets and went back to work.

It was while taking a bath that William discovered a strange rash on his arm. He headed to his local hospital in Cobram to get the rash checked out. The next day he was transferred to Goulburn Valley Hospital in Shepparton. Just four days later he received his awful diagnosis. It was at this point that he was referred to the team at St Vincent’s Private Hospital in Fitzroy.

William’s life has become a whirlwind of tests, chemotherapy, radiation, stem cell collection, and lengthy hospital stays. Despite undergoing these treatments to manage his condition, William remains resolute about his situation, “The way I see it is, it’s like spilt milk, you clean it up and get on with life.”

William has experienced several complications during his treatment that have required the use of the Ultrasound machine. He developed blood clots, which need to be monitored very closely. He says he has two blood clots moving through his body.

“Apparently, the blood clots can take six to nine months to dissolve. The team can keep an eye on these with the Ultrasound. It’s helped to keep on top of my treatment and monitor all the elements and difficulties related to my condition successfully.”

Eighth Floor Nurse Unit Manager, Hannah Warne, explains that to undergo chemotherapy, William had to have his heart checked by the Ultrasound. “We do this with all our patients to ensure they are not at high risk of cardiac toxicity which some chemotherapies can cause.

“William then had a peripherally inserted central catheter (PICC) put in for his chemotherapy regimen. Unfortunately, after his first cycle of treatment he developed a deep vein thrombosis in his arm on the same side of the PICC insertion. This was luckily identified by an Ultrasound. He was then treated to prevent the clot from increasing.

“After the second cycle of chemotherapy, William developed a chemotherapy induced atrial fibrillation. He now regularly receives an Ultrasound to ensure his heart function is adequate prior to chemotherapy.”

William credits his specialist, Associate Professor Ali Bazargan, and the staff at St Vincent’s for easing his burden and making his often-lengthy hospital stays, (his first stint lasted 77 days) as pleasant as they can be.

“I can’t speak highly enough about the doctors, nurses, even the cleaners. Everyone is so fantastic and incredibly kind. I feel extremely well cared for.”

William’s current hospital stay is focused on collecting his stem cells, followed by more chemotherapy. If the stem cell harvesting is successful, he’s hopeful he may go into remission.

William is looking forward to returning home to his four-acre property in regional Victoria to spend time with his beloved dog, Eddie and his brother, Robert. His brother lives in Queensland, but has come to stay with William to help with his care.

“I’m very lucky to have my brother and an abundance of friends. Robert has been really wonderful. He’s been doing everything for me, apart from cooking. I can’t wait to get home to just focus on normal life for a while,” William said. 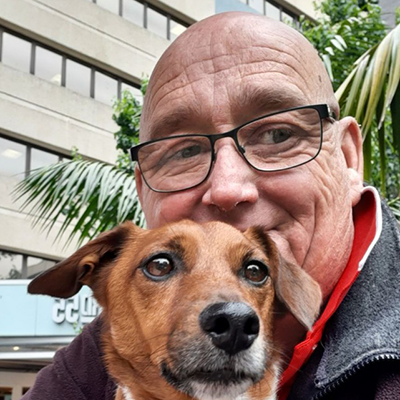 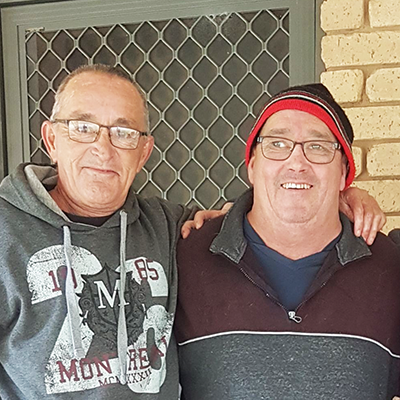