An instant and truly special bond

On 26 March 2022, two special little boys, Sam and Dion, were born within an hour and a half of eachother. Dion was born at 32 weeks and Sam at 31 weeks. They spent the first seven weeks of their lives in the Special Care Nursery at St Vincent’s Private Hospital Fitzroy.

Fate brought them together and has united the boys and their families for life. This is their story…

Sam Solly came into this world with very little warning. Sam’s mother, Jacqui’s water broke at just 31 weeks. At first, her medical team at St Vincent’s Private Hospital Fitzroy thought she could remain in hospital for two weeks, to bring Sam closer to term. But after receiving Jacqui’s test results, the team discovered she had a serious infection that required an emergency surgery to deliver Sam prematurely.

Jacqui remembers being terrified at having to induce her new baby so early. “Sam, or Sammy as many people call him, is our second child. My first pregnancy was trouble free, so my husband Tim and I never thought for a moment we’d have any issues.”

Sam developed well for the first few weeks, until at three weeks old, he stopped breathing and had to be resuscitated to save his young life.

Jacqui recalls the harrowing moment she nearly lost her son. “Sammy was doing so well that he’d been taken off the monitoring system. We’d just given him a bath and Tim was holding him when all of a sudden he went very still. Sammy turned grey and the team rushed to his aid to revive him. This is a moment that will haunt me forever.” 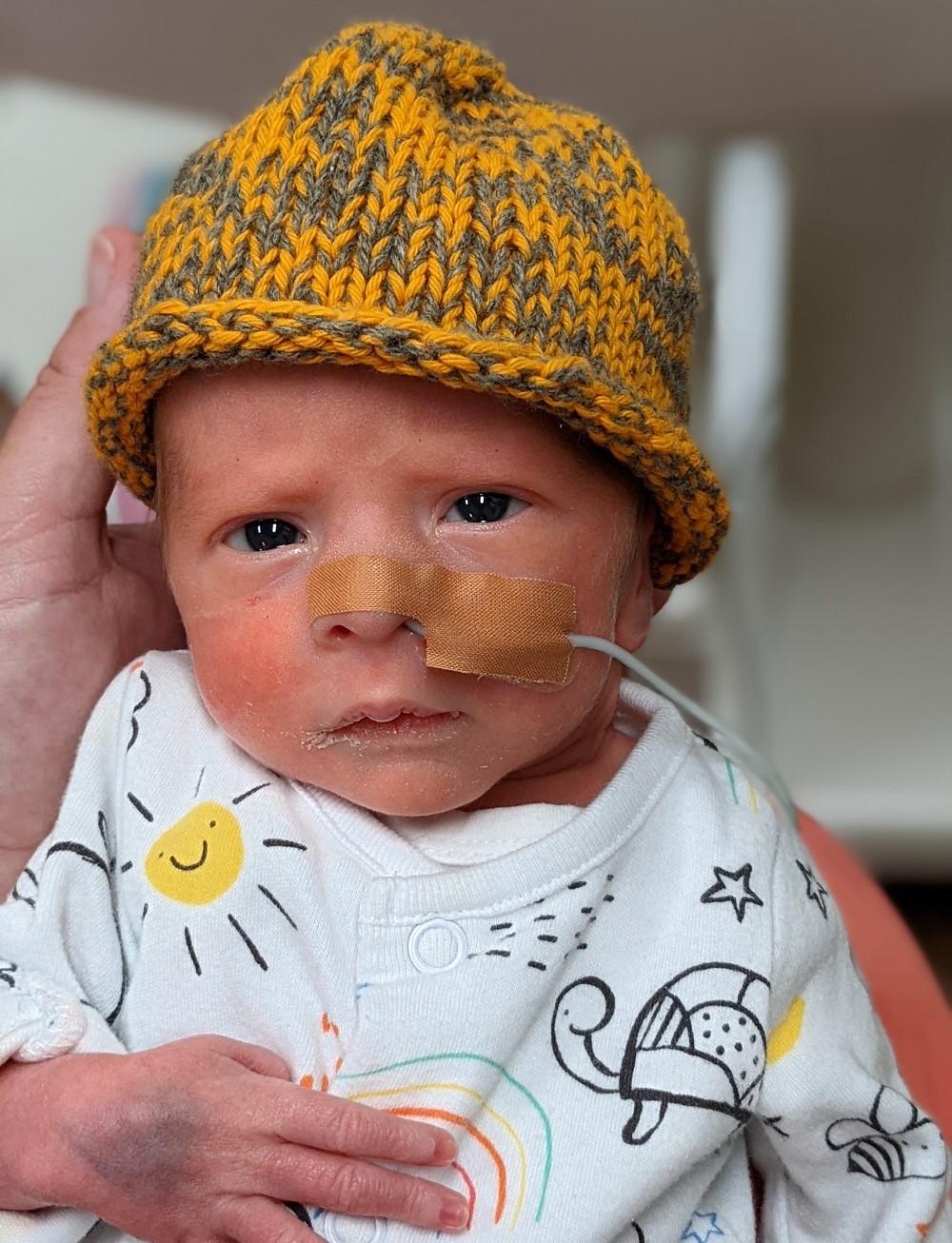 Jacqui will be forever thankful to the St Vincent’s team for  their support. “It’s an incredibly stressful time. I don’t think we would have got through it without Clare, Jodie and the special care nursery team, they are a truly remarkable group of women. They were counsellors and mothers to us. They genuinely cared for us and for Sam – we’ll never forget them!”

Luckily, the event was over quite quickly. But it became the start of a series of traumatic occassions where Sam needed to be resuscitated. After seven weeks in St Vincent’s Special Care Nursery, Sam was moved to The Royal Children’s Hospital where he underwent a series of tests and a blood transfusion that finally enabled him to go home.

After nine weeks, just two days after his due date, Sammy was finally united with older brother Zach who is three and a half. The two have quickly bonded.

Jacqui still needs to remain very vigilant and be extra careful with Sam, but he is growing and improving everyday. And there is no doubt he is a much loved addition to the Solly family. 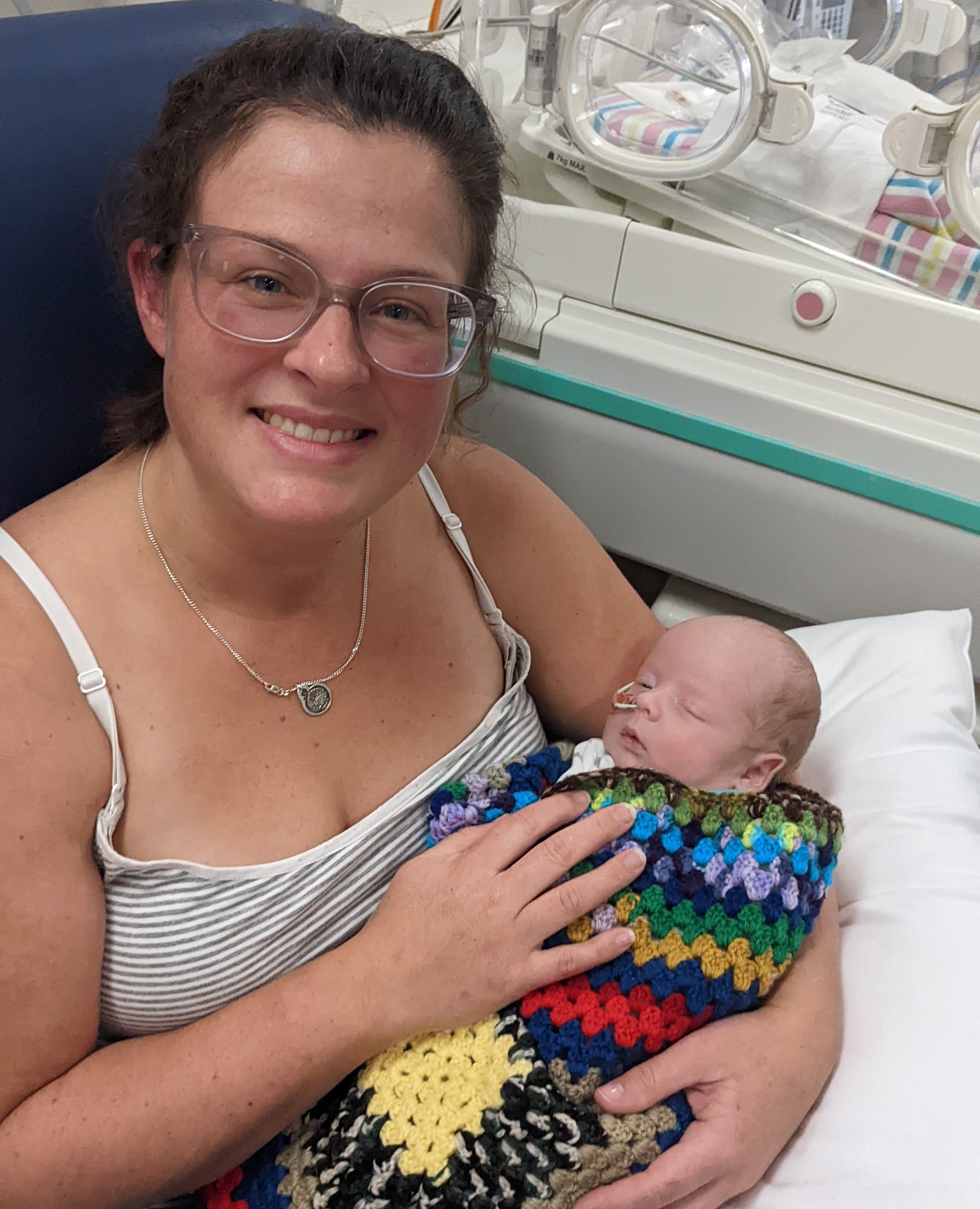 Dions’s Story
Adriana and her husband Pierre had struggled to get pregnant. So, like many couples they turned to IVF.

“Being an IVF pregnancy and my first child, my obsetrician (OB), Dr Maria Bonazzi and midwife Tamsyn, wanted me to have extra scans and visits to track Dion’s growth,” Adriana said.

Prepped to attend a wedding, they popped in to have their monthly scan on a Saturday morning. Worringly, the scan showed there hadn’t been any growth since the last scan. As a precaution they were sent to St Vincent’s Private Hospital Fitzroy to do some extra tests.

Adriana said the rest of that day was a whirlwind. She was taken up to the delivery suite to discover she had a rare condition that caused her placenta to shut down. Her OB, Dr Maria, said they would have to deliver her baby that day.

Adriana said she and Pierre were in total shock. “All I remember is my OB saying Dion had to come out. It was literally three hours from scans to delivery. But all the staff were phenomenal.

“Everything was a blur. The next 24 to 48 hrs were the most critical. We’re not the tallest couple so we knew we’d have a small baby but when Dion was born, he was just 1.3kg, then he dropped to 1.2kg. He was just so tiny which was really scary. 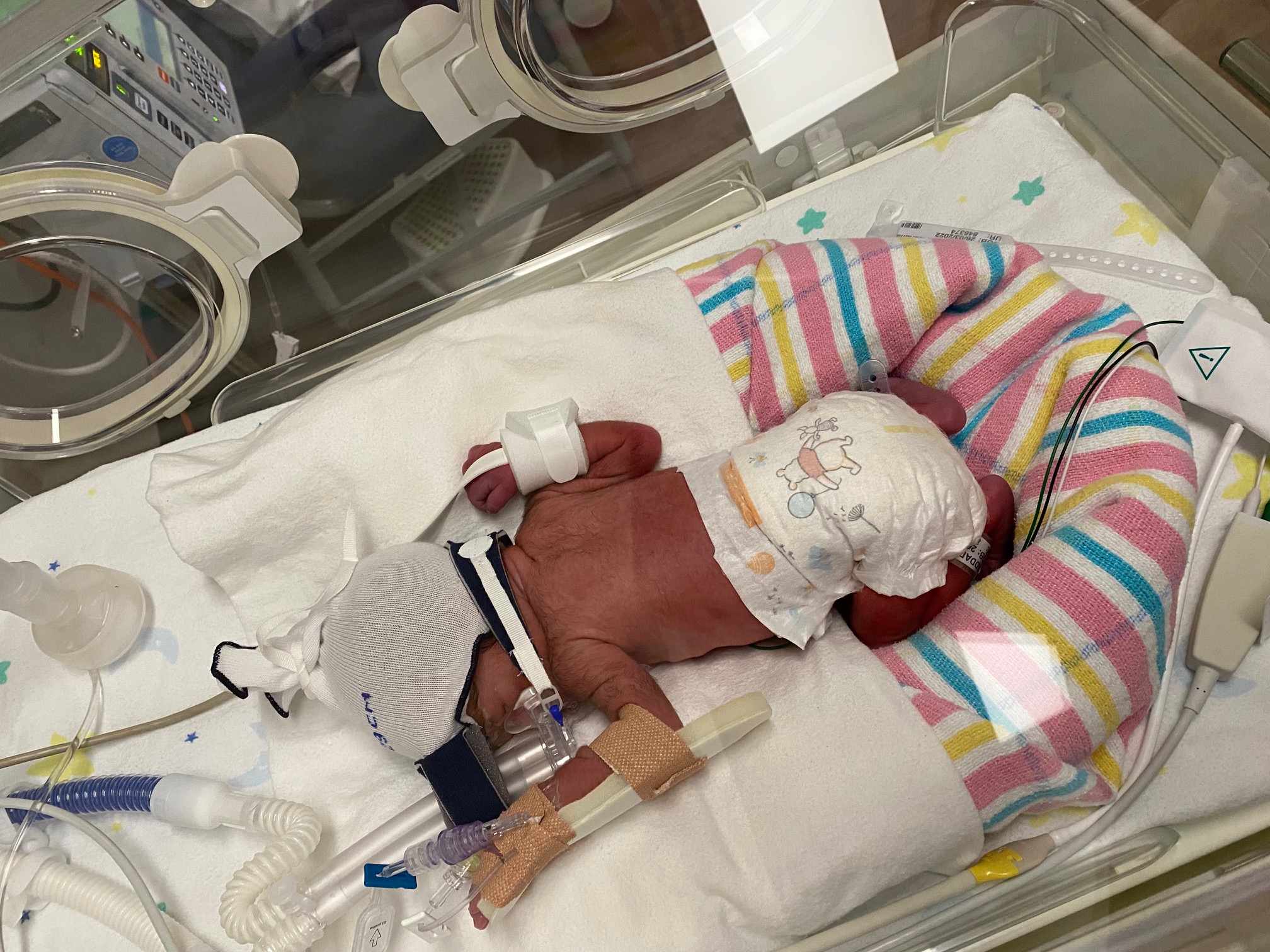 Dion had to remain in an incubator for a long time because he was so small. He didn’t know how to suck, swallow and feed simultaneously, so the nurses had to teach him.

“Dion went purple a few times when I was trying to feed him, that was really frightening. The team were amazing. They were so calm in a crisis. I can’t say thank you enough to the women in the Special Care Nursery. I don’t think they know just how much they have done for us – thank you doesn’t seem like a strong enough word,” Adriana said.

Dion is four months old now. He still on weighs over four kgs, which is closer to the weight of a two-month-old baby but he’s expected to catch up by the time he’s two.  Apart from that he’s doing really well.

Adriana is loving being a mother. “I didn’t think I’d enjoy as much as I do but I’m having fun. I love it. You have good and bad days but I wouldn’t change anything about this experience.

“Some people have asked if I’m worried about having another baby but I’m not because we received the greatest care. I would definitely have another child with the same team and only at St Vincent’s.” 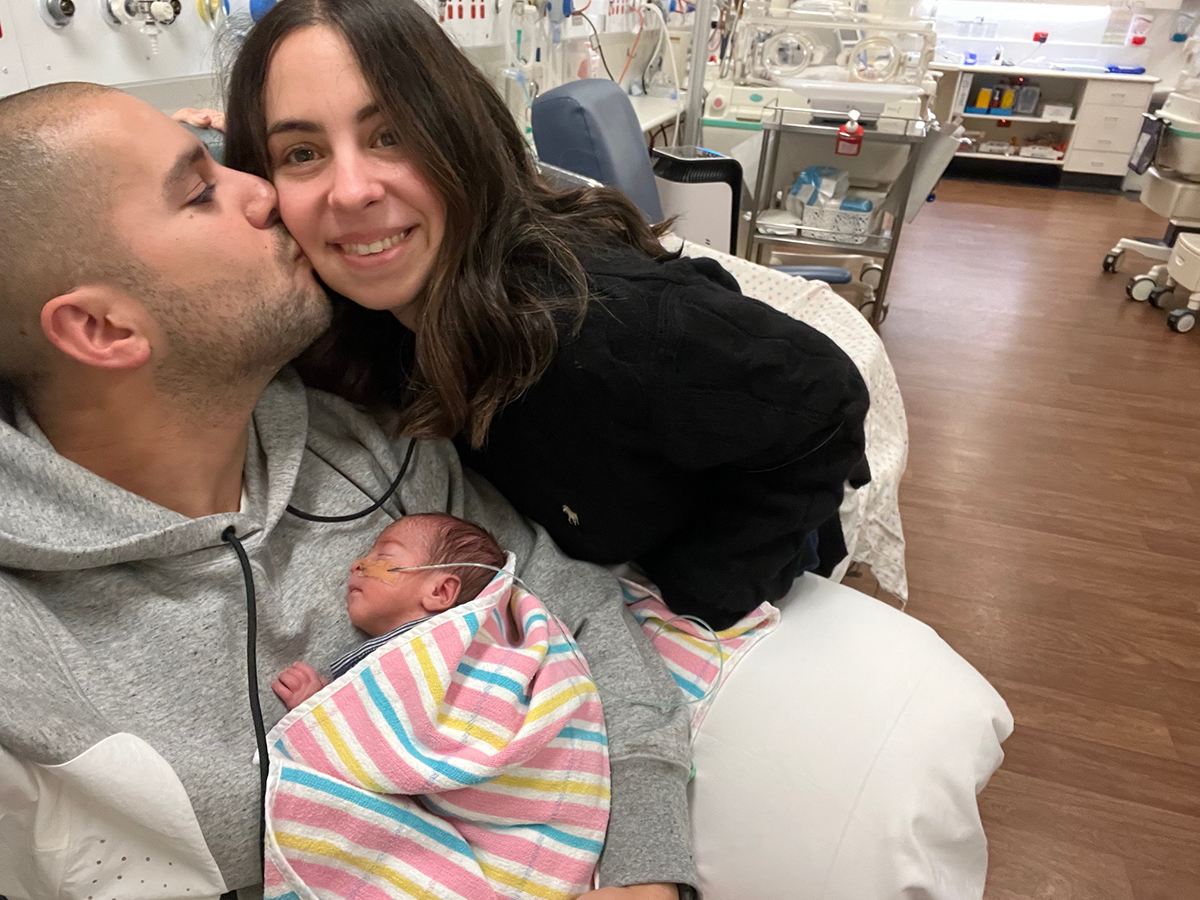 It was a bizarre coincidence that brought Sam, Dion and their parents together. Both Jacqui and Adriana required surgery to deliver their babies prematurely on the same day. Jacqui had her surgery first, and Adriana went in straight after.

Just a couple of days later, both mums were in the Special Care Nursery holding their tiny, new born, premature babies. Jacqui looked across to Adriana and noticed she was looking rather overwhelmed. Overcome by a sense of compassion, Jacqui went over to Adriana and hugged her.

“As a first-time parent, I can only imagine what Adriana was going through. It must have been mind blowing. I told her it will be ok and then said, by the way, I’m Jacqui.”

The mother’s bond was sealed from that moment. Almost at the same time, their two boys, Sam and Dion, established a solid, non-verbal connection. They become completely in synch with each other. If one cried, the other would cry. They gained weight at the same time and seemed to relish being close to one another. In fact, the nurses commented that they were convinced the boys somehow had a special ability to communicate with each other. 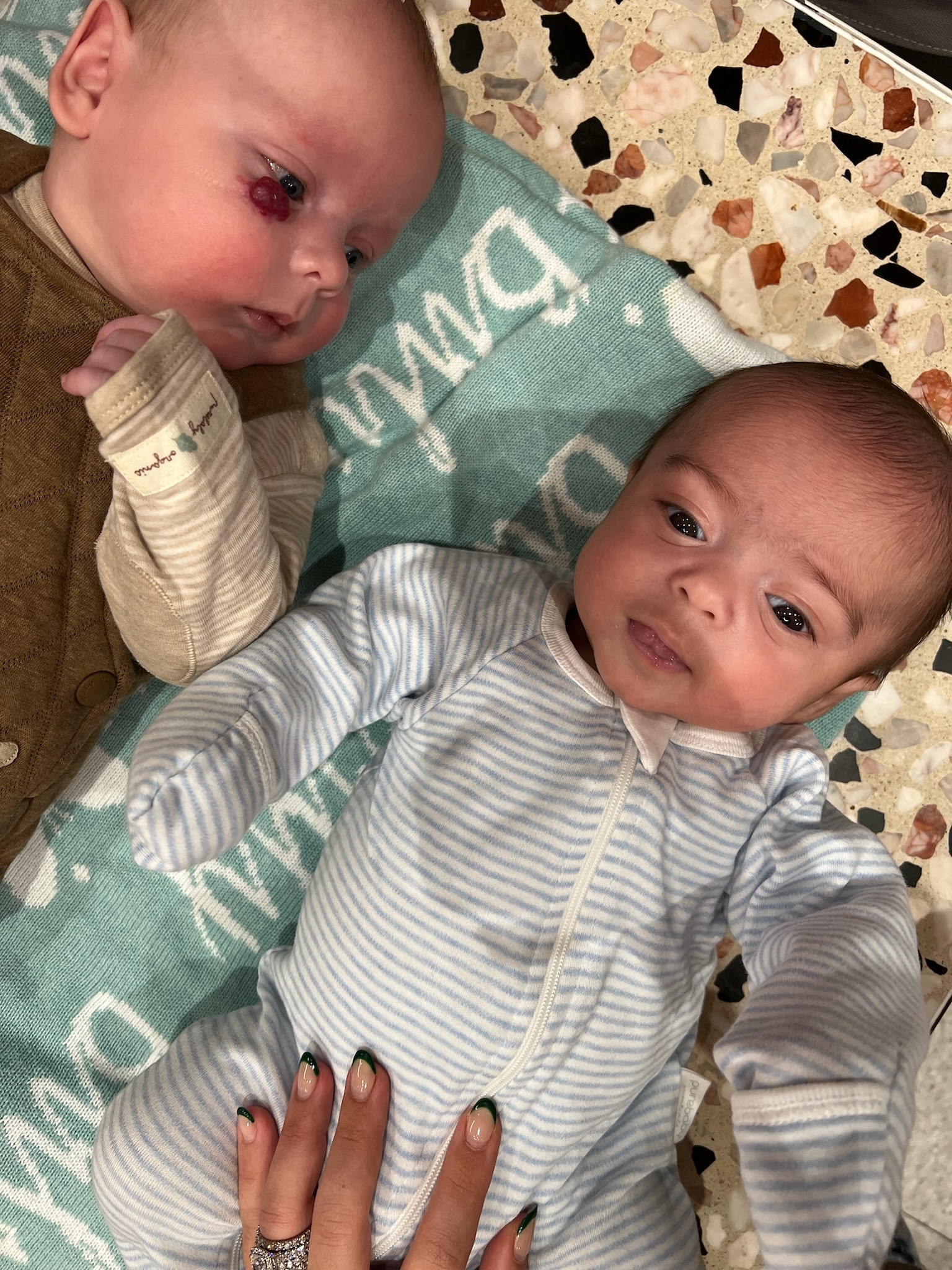 Jacqui’s husband Tim is a quiet and creative 6ft 5 gentle giant. He wrote a picture book to mark the boy’s special friendship called ‘Little Sammy Had a Friend’.

“90 percent of the time it was really distressing time, especially coping with Sam’s breathing issues. The little book will act as a really positive reminder of the experience,” Jacqui said. 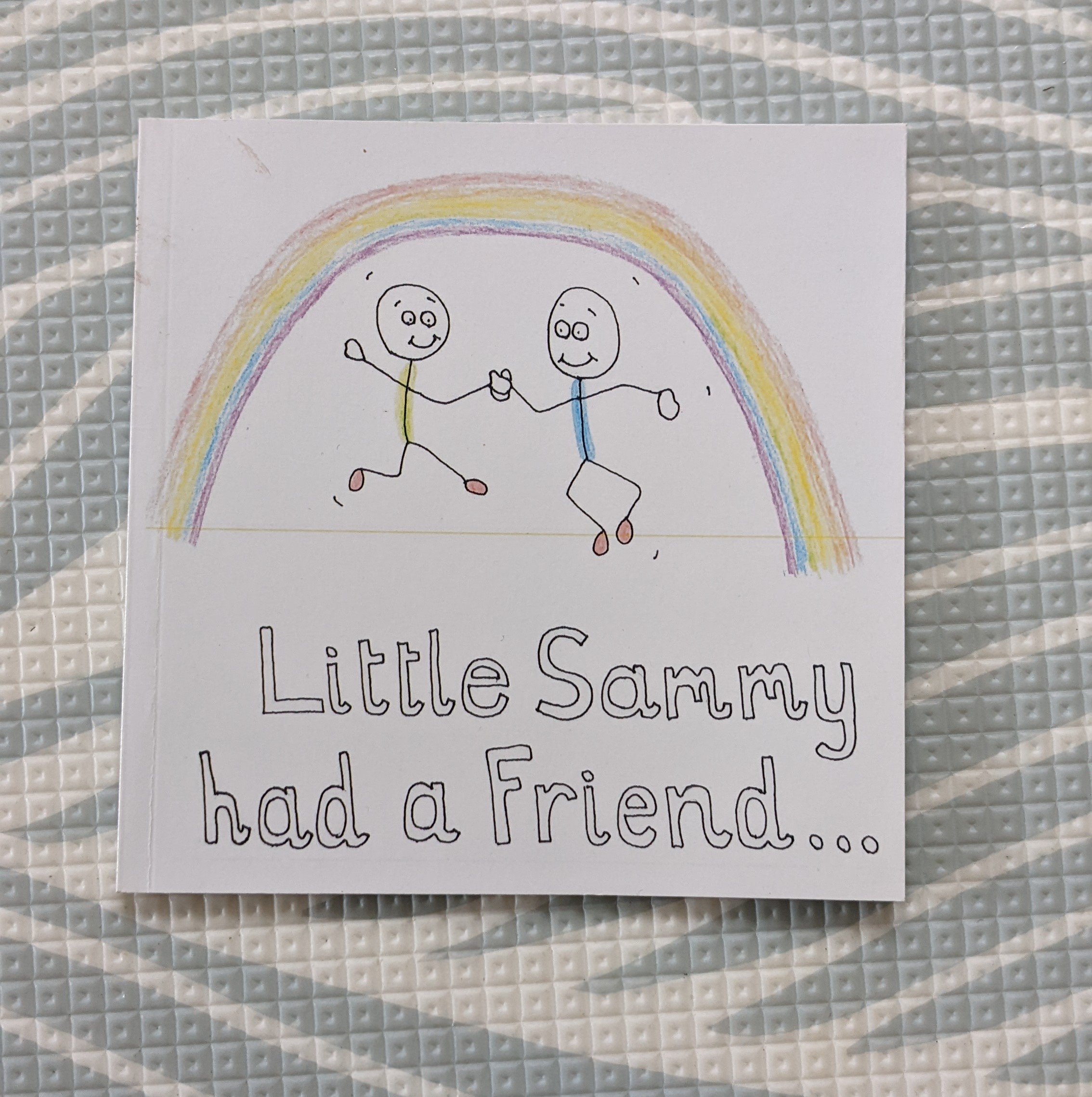 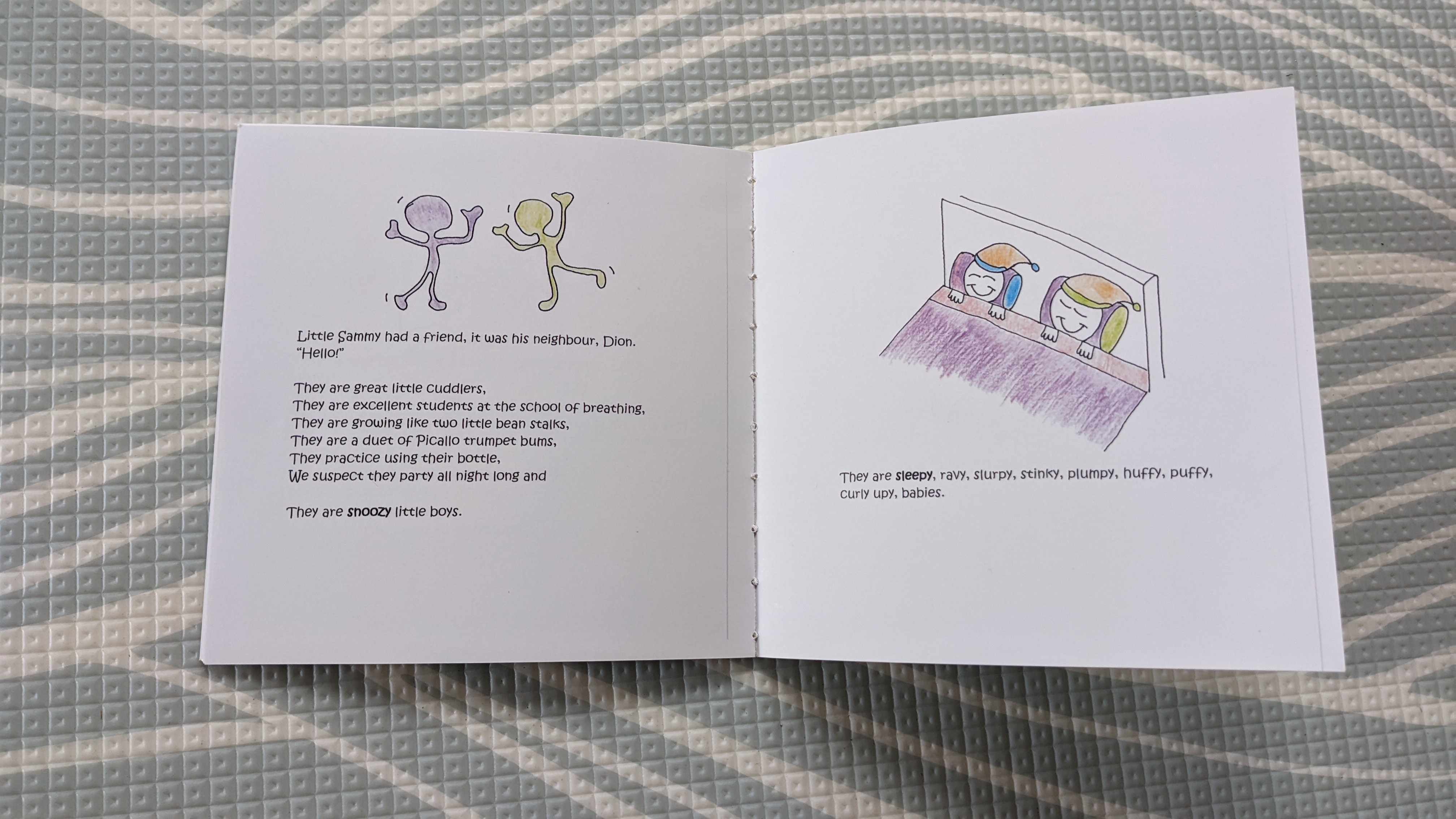 Jacqui recalls, “We all had an instant connection. It was so nice to have the support of such a lovely couple who were going through the same thing. We’ve been able to cry together, get angry together and to share the milestones together. We all agree the friendship definitely helped us all get through this very challenging time.”

Adriana confirmed, “We were so lucky to meet Jacqui and Tim. Dion and Sam, and our families will all most definitely remain friends for life. 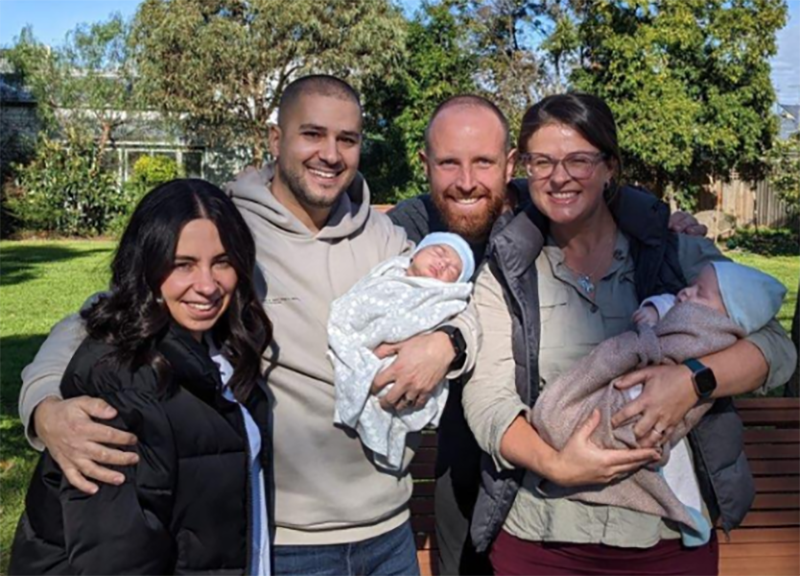 Your support can make a difference

We are aiming to raise $10,000 to enable us to purchase items that will enhance St Vincent’s Hospital’s maternity care for babies, new parents and our nurses. Items Include:

Kangaroo-care Chair - Cost - $5,000
Many mothers caring for babies in the Special Care Nursery have just had surgery. Imagine sitting for hours in an uncomfortable chair, suffering from painful stitches, whilst trying to focus on a sick baby.

The Kangaroo Chair is all about comfort, support and safety. Its wide back supports mother and the baby as they turn from side to side. The chair locks in all of its reclined positions so there is no sudden movement that would be startling and potentially dangerous.